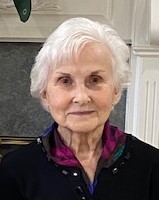 Janiece Smith Cox, born April 4, 1932, was welcomed into the arms of her Lord and Savior Jesus on Tuesday, June 30, 2020 after a very brief illness. She was surrounded by her family and gracious caregivers at BR General. A life-long consumer of knowledge and when asked, dispenser of sage wisdom and guidance, Nee, as her grandkids knew her, lived the visionary life of a true follower of Christ. Her compassionate heart for the underserved drove her 30+ year career in the EBR public school system at Prescott Jr and Sherwood Jr Highs as a math teacher and guidance counselor. She pushed the good to be great, and the lesser student to find their passion and maximize their God given abilities. Many of our family prayer times included the names of students and their families who were struggling with unnamed issues that burdened her heart. A true servant, taught to serve and love others from birth by her late parents William Andrew and Ella Stribling Smith, she prayed a new prayer after her husband, the late Albert L. Cox had his first quad-bypass coronary surgery. “Lord, let me live long enough to care for him until his death”. Her prayer was fulfilled with his passing three months ago after a long illness, ending a 65-year marriage. She was blessed with many friends from all over the country, gained from their motor coach travels. Her invitation to coffee always included a slice of fresh homemade pie or cake as she and Pop loved to hang out with their traveling friends. She was a graduate of East Central Jr College, Delta State (Math) and LSU (Masters Counseling). Her 4.0 GPA was obtained while Keith was in JR high and he and Pop never missed a hot meal or a clean set of clothes, even as she continued to teach. She was college Homecoming queen but never one to boast, we only found out when it was discovered in a yearbook. A native of Union, MS, and resident of Baton Rouge, she is survived by son, Keith Cox, daughter in love, Sandra Cadriel Cox and three apples of her eyes, grandchildren William Andrew Cox, Alexandra Leigh Cox, and Olivia Marie Cox. Also survived by the last member of “the marvelous Smith girls” Marlene Smith Lee”, she was preceded in death by her other five siblings Ross, Howard, Jim, Eldrew, and Sarah Smith Spence. She was a long-time Sunday School and Vacation Bible school teacher at Brownfields Baptist Church and later a member at Zoar Baptist. In Pop’s later years she greatly enjoyed the Sunday School class at The Chapel Oaks. Initially out of necessity and later out of choice, she made almost all of her clothes and was a professional quality seamstress. After Pop’s death, she immediately began to make HEPA filter masks for family, friends and everyone else who asked due to COVID19. Jesus knew her well as one of his own as she spoke with him often and at great length, calling many by name who had need. “Well done thy good and faithful servant” You will be greatly missed! Graveside funeral service to be Thursday 7/2 at 11 a.m. at Hillcrest Memorial Garden in Baker, LA  Arrangements with Church Funeral Services and Crematory