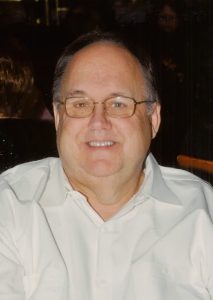 Gerard Dale Aguillard, born in Rougon, LA on June 8, 1951, passed away July 10, 2022, in Prairieville, Louisiana.  A lover of travel, food, theater, games of chance and spending time with family and friends, Dale was a devout Catholic and treasured member of the extended Aguillard family.  He was preceded in death by his parents, Howard and Julia Aguillard, sister Jerrie Beaucoudray, brother Ronnie Aguillard and nephew Neil Gerard Beaucoudray.  Left to cherish his memory are his sisters Pat Frederick of Belle Chasse and Diane Oquin (Billy) of Baton Rouge.   While Dale had no children of his own, he was a beloved uncle to 13 nieces and nephews and their children.

A proud veteran, Dale served his country as a First Lieutenant assigned to Minot Air Force Base as a Missile Launch officer.   He was a retired Human Resources professional from the City of Baton Rouge and remained close with his former HR professional society colleagues.  He also served as the Quarters at Dutchtown HOA President.

Throughout his life, Dale traveled extensively around the world and recently loved cruising with his sister, Pat.  Ever the character, Dale relished his time performing in local Baton Rouge community theater productions entertaining audiences with his memorable portrayals.  He later faithfully served his church community as a lector at both St. Alphonsus and St. John the Evangelist.

Dale loved trying new restaurants and deemed each new dish ‘the best I ever had.’  An accomplished cook and baker, no one cut out and collected new recipes like Dale.  There wasn’t a card game Dale didn’t enjoy and was often the organizer of game night with his neighbors and sister wives as he was known to call both his female friends and sisters.  Dale was proud of his unique heritage visiting the Canary Islands and being an active member of the Canary Islanders Heritage Association of Louisiana.

The twinkle in those beautiful hazel eyes and his infectious laugh will never be forgotten.  No Aguillard family gathering will ever be the same without our dearest brother and uncle walking in with his big smile and a 9”x13” pan of goodness.

Services will be held July 18 at St. John the Evangelist Catholic Church in Prairieville, LA starting with a Rosary at 9:30am, visitation at 10:00am followed by Mass of Christian Burial at 11:30am.  In lieu of flowers, please consider a donation to St. Jude Children’s Research Hospital or a charity of your choice.  The family would like to thank Dale’s gracious neighbors and the Ascension Parish Sheriff’s Office for their acts of kindness and humanity for Dale.