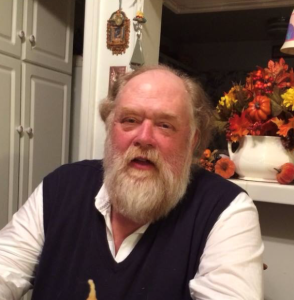 “Death is swallowed up in victory.”  (1 Cor 15:54)  Christopher Frank Griswold gained his victory on March 10, 2022.  Chris adopted Baton Rouge as his permanent home, but was born and raised in the mountains of East Tennessee.  Chris was born on December 23, 1952 in Chattanooga, Tennessee, the son of Raymond and Catherine Griswold.    He was preceded in death by his parents, Raymond and Catherine Griswold, brother Barry Griswold, and his best friend James “Ike” Swindoll.  He is survived by his niece, Bethany Haynes and family, nephew, David Griswold and family, and many cousins and friends.  Chris’ father owned the first pizza parlor in Chattanooga, so Chris grew up on pizza, and knew his stuff on that subject and many others.

Like his hero G.K. Chesterton, Chris was a convert to the Catholic Church, thoroughly enjoyed living, and was never in a hurry.   He was a good listener and a wonderful friend.  In his profession as a glazier, Chris restored stained glass windows at many churches, including St. Agnes Church, St. Joseph Cathedral, and many private homes and businesses.  But perhaps greater were his accomplishments in retirement.  Chris was a champion of the Culture of Life and defender of the unborn person.  He served as chairman of the St. Agnes Culture of Life Committee,  Chris was also a member of the St. Agnes Knights of Columbus Council, and worked with them to start the St. Agnes Red Rose Giveaway to benefit the Pregnancy Problem Center of Baton Rouge.  Chris was also a founding member of A Better Way – Baton Rouge.

Chris was very well-read in good literature, and was known in literary circles.  Along with Karen Hornsby and Peter Chol, Chris hosted the unique radio show “Beautiful Minds” on Catholic Radio Station WPYR, which introduced listeners to Chesterton and other great modern authors.  Chris was a devoted member of the Baton Rouge Chesterton Society, and attended all the Louisiana Chesterton Conferences.  Aside from Chesterton, Chris especially loved the works of Walker Percy.

Visitation will be held at St. Agnes Church, 749 East Boulevard, Baton Rouge, at 10:30 am, followed by the Holy Rosary at 11:30, and Requiem Mass at 12 noon.  Interment to be at Roselawn Memorial Park in Baton Rouge, where Chris loved to pray for the Holy Souls in Purgatory.

In lieu of flowers, Masses for Chris’ soul may be requested from any Catholic parish or mission society, or donations may be made to the Pregnancy Problem Center, 3005 Florida St., Baton Rouge 70802.  Fond memories of Chris may also be expressed at www.churchfuneralservices.com/obituaries.