In Loving Memory of Gloria Gibbens 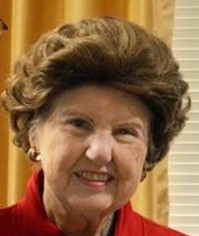 Gloria Bajon Gibbens passed peacefully into the arms of Our Lord on Friday, June 19, 2020. She was a native of Baton Rouge and a current resident of St. Gabriel. Gloria was born on March 13, 1926 to David Thomas Bajon and Ann Hebert Bajon. She was married to Roy Bernard Gibbens on October 18, 1947 and had been a loving wife for 73 years. She was a wonderful mother to three children and an adoring grandmother and great- grandmother. Gloria was a devout Catholic and a lifetime parishioner of St. George Catholic Church. She was a member of Catholic Daughters and involved in many prayer groups. She retired from General Equipment after dedicating 15 years of service. Her favorite activities were camping, fishing, and spending time with her family. Graveside services will be held on Friday, June 26, 2020 at 11:00 AM at Roselawn Cemetery in Baton Rouge. Fr. Charlie Landry of St. Gabriel Catholic Church will officiate. A funeral mass will be held at a later date. Gloria is survived by two daughters, Patti Cross and Terri Barksdale. She was MiMi to eight surviving grandchildren and six great- grandchildren. She was preceded in death by her husband; parents; son, Steve Gibbens; grandson, David Gibbens; and brother Lloyd Bajon. Church Funeral Services of St. Amant is in charge of arrangements. Your wings were ready…but our hearts were not.