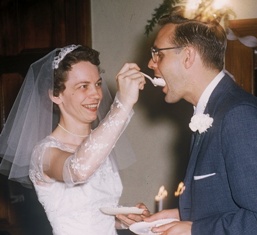 Born the youngest daughter of a rural mail carrier in Dexter, Maine, Joyce Catherine Lowell grew up during the Great Depression, left her hometown in her twenties to pursue a new life in the city of Worcester Mass., and met and eventually married a man who had also moved from Maine. The youngest of five children, Joyce was born on March 16, 1927. She grew up in a large Victorian house on Pleasant Street, where her mother, Frieda Simpson Lowell, took on borders to make ends meet and shoveled coal into the basement furnace during the long winters. Her father, Ralph Waldo Lowell, worked for many years as a mail carrier. She enjoyed summers at Lake Wassokeag and worked as a clerk at the Ben Franklin store and as a secretary at Abbot’s Woolen Mill in Dexter before moving to Worcester, where she worked as a secretary at Norton Abrasives. She lived in a boarding house, managed by a house mother who had strict rules about male visitors. She met Richard Mitchell in the Spring of 1957 on a bus during a return trip from Maine. They married one year later, on June 28th, 1958. Joyce Lowell Mitchell was a meticulous homemaker who enjoyed cooking and baking. She made candy bags and frosted gingerbread cookies at Christmas, loved to go shopping, and had a serious love affair with chocolate. When she went grocery shopping, she would often return with an opened package of chocolate covered marshmallow pinwheel cookies, and she kept a secret stash of chocolate in her desk. She was also serious about cooking square meals. She served red meat no more than once a week, and the main dish always had to be accompanied by a yellow vegetable, a green vegetable, salad, potato and a dinner roll. She always wrote people thank you notes, and never missed a Christmas, anniversary and or birthday card. Once her children were in school, Joyce worked for a time at Woolworth’s, where it was her thankless job to catch the parakeets that escaped in the pet department. Later she worked at Digital Equipment Corp. as a secretary. In her retirement years Joyce moved with her husband to Swanzey, NH to be closer to family. They spent winters in Florida and in Baton Rouge visiting Susan Mitchell. She enjoyed her flower gardens, loved birds—especially cardinals and bluebirds—and decorated her home with many bird-themed items. On February 23, 2020 Joyce passed away peacefully in her sleep at Ollie Steele nursing home in Baton Rouge after a 12-year battle with Alzheimer’s. She is survived by her husband of 61 years, Richard Mitchell, of Baton Rouge; her family Susan Mitchell, Jerry and Dylan Gilbert, of Baton Rouge, and Robert, Janet Fiderio, and Holly Fiderio Mitchell, of Gilsum, NH. The family plans to hold a small, private service in Baton Rouge and a burial in New Hampshire at a later date. In lieu of flowers, donations may be made to the Alzheimer’s Association at www.alz.org