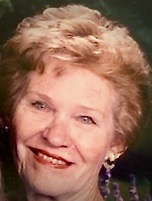 Caroline Hay Messina, age 90, passed away on Wednesday, July 3, 2019, in Dutchtown, Louisiana. She was born Caroline Juanita Hay in Charleston, South Carolina on November 21, 1928 to Lena L. “Louise” Martin Hay and Thomas Benjamin Hay. She was preceded in death by her husband of 52 years, Andrew Clinton Messina, Jr., her daughter, Linda Louise Messina Acosta, and her granddaughter, Nicole Rose Pizzalato. She was survived by her daughters, Wendy Messina Cormier (Frank), and Peggy Messina Perry (Alvin, Jr.); five grandchildren, Cherie Ann Pizzalato Smith (Michael), Andrew Robert Pizzalato (Angela), Kerri Smith, Alvin “Trey” P. Perry, III, M.D. (Meghan), and Kathryn Meghan Perry (Elizabeth); twelve great- grandchildren; as well as eight great-great-grandchildren. She is also survived by her two sisters, Annette Cottingham and Lennette Porter, both of Charleston, South Carolina, as well as a host of nieces and nephews. While attending nursing school in New Orleans, Louisiana, she met and married the love of her life, Andrew C. Messina, Jr. She received her nursing degree from Southern Baptist Hospital in New Orleans, Louisiana in 1949. She was a resident of Chalmette, Louisiana for 45 years before relocating, after Hurricane Katrina, to Youngsville, Louisiana and then to Dutchtown, Louisiana. She was an avid golfer who, in retirement, enjoyed the many happy years she spent with her husband, Andy, and friends at Braithwaite Country Club. The family wishes to extend their heartfelt appreciation and gratitude to the staff of The Hospice of Baton Rouge. A private gathering will be held at St. Bernard Memorial Gardens where she will be laid to rest.