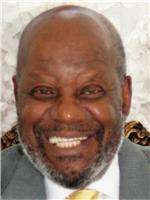 Eugene Marion Brown, Sr., 70, of Baton Rouge, Louisiana, transitioned to his eternal home, Friday, March 1, 2019 at his beloved home surrounded by his immediate family. A celebration of life memorial service will be held at 11:00 a.m. Saturday, March 9th at Word of Life Christian Center, 40066 LA-22, Darrow, LA 70725. Eugene was born February 7, 1949 in Savannah, Georgia to Amos Marion and Leona Brown. He graduated from Beach High School in 1967 and from Georgia Southern University in 1971. He married his wife, Denise Ann Juge, of 43 years in Baton Rouge, Louisiana. From this marriage three children were born: two sons, Eugene, II and O’Lindsey (Danielle) Houston, TX and one daughter Artie (Brandon) Varnado. Eugene was the founder of Brown & Brown Custom Clothiers and a well respected tailor since 1973 in the Baton Rouge and surrounding areas. He was a devoted husband, father, and grandfather, but most importantly, he was a man of God. He was a faithful member of Word of Life Christian Center where he served as a Master Bearer, Board Member, and spearheaded a drug outreach program. Eugene is survived by his wife, Denise, two sons, Eugene, II and O’Lindsey (Danielle) Houston, TX and his daughters Artie (Brandon) Varnado, Katrina (Babatunde) of Atlanta, GA, Gail (Ira) Jones of Savannah, GA and Tonya Pace of Savannah, GA; nine grandchildren. One brother Nathaniel (Vickie) Brown of Atlanta, GA and sister Lunetta (Howard) Duncan of Savannah, GA, along with several beloved nieces and nephews. He was preceded in death by his parents, Amos and Leona.