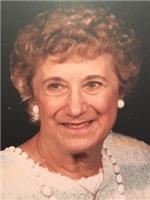 Christel Eva Maria (Manske) Daykin passed away on September 7, 2018 at the age of 91. Christa was born on March 14, 1927 in Stolp, East Germany. She had a very happy childhood until World War II. Christa and her mother escaped the Russians and immigrated to West Germany. She married Heinz Joachim Kunoth in Bayreuth, Germany and they had two children, Peter and Monika. One month after Monika’s birth, Heinz was in a jeep accident and died shortly thereafter. Christa and her children shared the home of Georg and Gretl Benker in Bayreuth for the next 11 years. In 1959 Christa and her children immigrated to the U.S. and settled in Seattle, Washington. There Christa met Henry “Ward” Daykin; they married and moved to Pismo Beach, California. They had one son, Edward. Following Ward’s career they moved to Connecticut, Louisiana, Florida, and Ohio. After Ward’s unexpected death in 1976, Christa and Ed moved to Baton Rouge to be closer to Monika and her family. Christa lived there for the rest of her life. Christa is survived by three children (and their spouses): Peter (& Sue) Kunoth, Monika (& Max) Luna, and Ed (& Georgia) Daykin; five grandchildren (and their spouses): Monika (& Tommy) Bowden, Mackie Luna, Kurt (& Laura) Kunoth, Haley (& Phillip) Zamora, and Austin (& Brittni) Daykin; and four great grandchildren: Thomas and Jordan Bowden, Grayden and Wyatt Kunoth. She was very proud of her family. We are thankful to the family members, friends, and neighbors who supported Christa in her independent living for many years. Through her perseverance and resourcefulness, Christa lived an amazing and eventful life. She will be missed. Services will be conducted at St. Paul’s Lutheran Church (2021 Tara Boulevard, Baton Rouge) on Sunday, September 16, 2018 at 2:00 p.m. All who knew her are invited to attend.