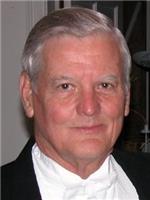 John H. Crabtree died on July 15, 2018. He was 82 years old. John is survived by his wife, Patricia; his son John H. Crabtree III of Baton Rouge; his daughter and son-in-law, Katherine and J.B. Cook of Los Angeles; and his grandchildren Jimmy and Lila Cook, also of Los Angeles. He is also survived by his sister-in-law, Connie Hester, his cousins, Jane Perkins, Libby Aten, George Crabtree and Junius Allen, and nephews Joe Overton, Jr., and Chris Hester. He is preceded in death by his parents, John and Ina Crabtree; his younger twin sisters, Mary Ann Crabtree and Bettye Lee Overton; his brother-in-law, Bob Hester, and his daughter-in-law, Kathleen Campbell Crabtree. John was born in Helena, Arkansas. He was a graduate of Rhodes College in Memphis, Tennessee, where he served as a trustee. He was also a graduate of Louisiana State University. John was a member of the First Presbyterian Church of Baton Rouge where he served as an elder and trustee. He was a veteran of the United States Army. A memorial service will be held at First Presbyterian Church on Tuesday, July 24th with visitation from 10:00-11:00 and the service at 11:00. Internment will be in the Columbarium at the church. In lieu of flowers, donations may be made to the First Presbyterian Church of Baton Rouge Foundation Campus Fund. Arrangements are being made by Church Funeral Services Baton Rouge, 225-293-4174 www.churchfuneralservices.com