In Loving Memory of Richard Turner 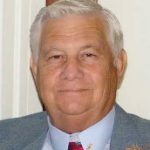 Richard retired to Heaven on June 18, 2018. In celebration of his life, we honor him. He is survived by his wife of 63 years, Flora Raye Turner and his children, Trudy Turner Smith, Mark Monroe Turner, and Curtis Dean Turner as well as their spouses Ed Smith, Sigita Turner, and Jeannie Turner, respectively. Richard also has a step-sister, Rose Marie Steele. He has 10 grandchildren Edwin, Brady, Shelly, Jill, Rebekkah, Johnathan, Megan, Hannah, Matthew, and Gabby, as well as 10 great grandchildren. He was preceded in death by his father Munson Turner and mother Margaret, step-mother Rosalie, brother Don, and sister Doris. Richard was a native of Baton Rouge, graduate of Baton Rouge High School, studied at LSU, and a residence of Central, La. Richard was a Gideon as well as a Brother Master Mason in Lodge No. 442 in Central, La. and was honored to be a York Rite. He was retired from Southern Mortgage Services, a company that he and Mrs. Turner owned and operated for nearly 30 years. Richard was a member of Zoar Baptist Church at the time of his death. Viewing is scheduled at Zoar Baptist Church, 11848 Hooper Road, Baton Rouge. La. 70818, on June 23, 2018 from 8:00 a.m. – 10:30 a.m., with a service scheduled to begin at 11:00a.m. Burial will follow at Roselawn Cemetery in Baton Rouge.