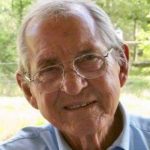 “This is my commandment, that you love one another as I have loved you.” A loving husband, father, son and brother, Donald entered into eternal rest surrounded by family and loved ones on June 18, 2018 at 4:30 p.m., at his home in Gonzales, LA. He was 84. He is survived by his wonderful wife of 60 years, Gayle, and 5 sons and daughters-in-law: Ty and Patricia Gautreau, Michael and Tina Gautreau, Spencer and DeShae Gautreau, Clay and Angie Gautreau, Reed and Shellie Gautreau; 14 grandchildren: Roxanne Hotchkiss, Tyler Gautreau, Mason Gautreau, Rebekah Gautreau, Bryce Gautreau, Claire Gautreau, Nicholas Gautreau, Allison Gautreau, Jordan Gautreau, Lindsey Gautreau, Sydney Gautreau, Gabrielle Gautreau, Kate Gautreau and Jacques Gautreau; and 6 great-grandchildren. Donald is also survived by a sister, Gadys Pavey and many beloved nieces and nephews. He is preceded in death by his parents, Leonce P. Gautreau and Rose B. Gautreau and other siblings. Donald was a veteran of the United States Army. He was employed by Illinois Central Railroad Company and retired from Star Enterprise (Motiva) after 28 years ofemployment. Donald loved unconditionally and lead by example. He was always present to lend a helping hand or a shoulder to cry on. He had the calmest of spirit and the greatest of wisdom. He will be deeply missed by all who had the pleasure of crossing his path. Visitation will be held at St. John Catholic Church on Friday, June 22, 2018 from 9-1la.m. immediately followed by Mass of Christian Burial, and laid to rest at St. John Cemetery. The family would like to thank all who loved Donald and give special thanks to Louisiana Hospice and his nurse, Stephen Hebert for his compassionate care. A special thanks to Francis Schmitt and Earline Babin for their loving care and support of Donald and Gayle during his illness. Church Funeral Services in St. Amant, LA are in charge of the arrangements.