In Loving Memory of Marie Orillion 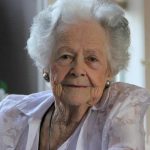 There is rejoicing in Heaven because Marie is home. She is passed from this life Thursday, May 10, 2018 at 12:30 pm. She was born in Lutcher, Louisiana and a long-time resident of Baton Rouge, born August 14, 1920. She was an accomplished swimmer and held a long-standing state record for her “free Style”. During the years of her competition Marie never weighed more than 105 pounds and was quite short, but she had a faultless style which was remarked upon by many visiting men swimmers of national caliber. Besides winning many Southern A.A.U. Championships she also captured the southeastern 220-yard free style championship in 1936 at Atlanta. Marie was invited to the Olympic trials in Germany in 1936.Her real success in life was being a loving homemaker and mother of 8, grandmother of 18, great grandmother of 27. In 1941 she married Arthur Joseph Orillion, Jr. They were married for 60 years.Marie supported her husband in creating a successful men’s clothing store “Arthur’s Clothes of Distinction”. She will always be remembered for her fun-loving spirit, wit and raspy laugh. She is survived by her children Valerie Baker (Paul), Arthur J. Orillion, III (Linda), Judy Hodgeson (Roger), Patricia Favaron, Michael Orillion, Marie Simcoe (Don), Deborah O. Craft, Terry Orillion (Kelly); grandchildren and great grandchildren.Proceeded in death by her husband Arthur Joseph Orillion, Jr.; parents Professor Richard P. Lowry, Sr. and Corrine Keller Lowry; siblings Marguerite Erra, Corinne Abreo, Kathleen Lowry, Edward Lowry, Valery Lowry, Francis Lowry, George Lowry, Jefferson Lowry and Richard Lowry. Visitation will be Thursday, May 17,2018 at Immaculate Conception Catholic Church, 865 Hatchell Lane, Denham Springs, LA 70726 from 9am to 11am followed by a Mass of Christian Burial at 11am celebrated by Reverend Eric Gyan. Interment will follow in Roselawn Memorial Park. Pallbearers will be Keith Orillion, Brian Leopold, Sean Leopold, David Hodgeson, Dr. Michael Hodgeson, Ben Tuminello, Heath Simcoe and Jason Simcoe. Thank you to the staff and friends at Gonzales Healthcare Center for their love and care and a special thank you to her friend and roommate Ms. Perrie. Arrangements made by Church Funeral Services and Crematory.