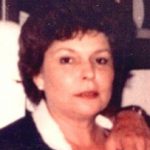 Donnie Marie Parker Harden of St. Amant, was born December 22, 1941, and passed away on Tuesday, March 13, 2018 at the age of 76 after a lengthy illness. “God saw she was getting tired and a cure was not to be, so He put his arms around her and whispered, Come with ME. With tearful eyes we watched her suffer and fade away. Although we loved her dearly, we could not make her stay. A golden heart stopped beating, hard-working hands put to rest. God broke our hearts to prove to us He only takes the best.” She was truly the anchor of our family and the “Royal Flush” of our hearts. She would give her “hand and foot” to her very special friends she played cards with throughout the years and her family. Her motherly love extended not only to us, but also many others throughout her life and will be forever missed by all. Survived by her children, William C. (Butch) Harden, Jr. and wife Juana, Joey Harden, Sr. and wife Cindy, Sandy Sharon and husband Leland, Randy Harden and wife Tonja, Melissa (Missy) Jones. Rhonda Breaux, daughter-in-law whom she thought of as a daughter. She will always have a special place in the hearts of her eight grandchildren, Joey Harden, Jr., Brandon Sharon, Chad Harden, Christopher (Chris) Sharon and wife Heather, Amy Harden and fiance’ Lyle Mock, Cassie Harden Guedry and husband Colton, Chase Jones and wife Jena, and Alexandra (Alex) Jones. Six great-grandchildren, Grace, Abby, and Cullen Sharon, Hadley Jones, Sadie and Allie Guedry. Also survived by her only brother James Ellis (Jimmy) Parker, Jr. and wife Martha. Preceded in death by her parents, James Ellis Parker and Rosalie Manno Parker, husband William C. (Bill) Harden, Sr. and son-in-law, Paul Reynaud Jones. A private memorial and graveside service will be held at Resthaven Gardens of Memory in Baton Rouge on Friday, March 16, 2018 at 11:00 AM. Special thanks to Saint Joseph Hospice of Baton Rouge for the care given to our loved one. Church Funeral Services of St. Amant, La. in charge of arrangements. Please send condolences to www.churchfuneralservices.com